Series Sunday: A Sin Such as This 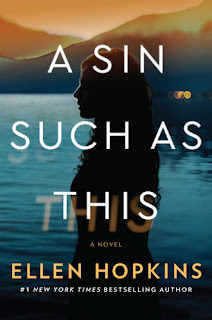 My Series Sunday pick is A Sin Such as This, the follow-up book to Love Lies Beneath by Ellen Hopkins. Tara has gone from a rich single woman to a suburban housewife. Her niece, Kayla, moves into the home and immediately hooks up with the seductive stepson. As if that is not enough family drama, Tara's sister is going through marital issues. Then we have Sophia, a gorgeous ex-girlfriend found murdered. All of the main characters had motive but only one is suffering the sins of others. Whew—this is a bit much! Crazy beget crazy.

"You are like rain, forecasted to quench a summer's thirsting, thirst grown beyond easy need, to life or death." ~ 31%

Let's look at the cover first. There is something about calming waters and a landscape that puts me at peace. Maybe too much. I fell asleep the first two times I started reading it. Then one chapter was really interesting and I saw promise for this novel. But it went downhill after that one chapter.

Here we are three years later with a sequel to Love Lies Beneath. I expected this follow-up novel to be better than the first book. It is largely because I am conditioned that Ellen Hopkins writes in beautiful prose. Not the case for traditional book format. The characters and the story itself fell flat, making it a struggle to finish. I found myself only looking forward to the few poems that separated sections. They told far more about the plot than dialogue and paragraphs did. Putting the format aside, I still did not care for A Sin Such as This as much as Ellen Hopkins' other works. Please go back to the beloved old writing style!

Happy Early Pub Day, Ellen Hopkins! A Sin Such as This is available Tuesday, May 29.


Disclaimer: This book was received directly from the publisher for review purposes only. In no way does it influence my review. The opinions I have expressed are my own and would be the same if I spent my hard-earned coins.

Title: A Sin Such as This
Author: Ellen Hopkins
Published: May 2018
Pages: 384
Edition: Galley
Rating: 🖤