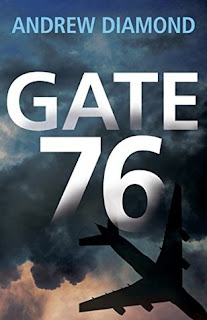 "Look too far into anything and you'll find something you're not supposed to know. And that's the first step toward getting involved." ~ 1%

Retired professional heavyweight boxer, Freddy Ferguson, is now an investigator working for a private entity. He has no clue at first that the mysterious woman seen boarding the wrong plane is in danger. It is not until her face and name appear in connection with a fatal crime that Freddy begins his nationwide search to find her. She could be the only living witness but pursuers might silence her for good.

"The results of the background check show up about two minutes before my plate of brisket. Think about that the next time you think there's such a thing as privacy in the internet age." ~ 45%

It is not often that I cancel all plans for an entire day to finish reading a book. Sure I have lazy moments when all I do is read. But Gate 76 was worthy of actually postponing all I had planned just because I could not focus on anything else until the story was done. Calling Gate 76 unputdownable is a statement you can take to the bank.

It has a very strong start with the mysterious woman pulling a switcheroo at Gate 76; minutes before the plane she was supposed to board crashes with a full flight of passengers. The plot takes readers through Freddy fighting his own internal battle while trying to protect a stranger. The ending was fitting. Do I have your attention yet? Trust me, bookhearts. This new release is intended for readers that love suspense and great character development.

Gate 76 has put author Andrew Diamond on my radar. I really wish he would grant my wish and make this into a series; I need more Freddy Ferguson in my life.