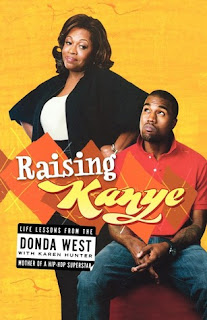 Donda West is the deceased mother of hip-hop superstar and fashion designer, Kanye West. This book, Raising Kanye: Life Lessons from the Mother of a Hip-Hop Superstar, was published six months before she passed away. It is about lessons she learned being a single mother in a black community and raising a son with strong moral values. She even explains his reputation as a "mama's boy" and excuses his outbursts. I get the idea she was the type of mother who thought her child did no wrong. In fact, this book was moreso how Kanye helped shape Dr. Donda to be the woman she was.

So why did I pick up this book eleven years after it's been published? Well, I wanted to get more insight into Kanye given his recent erratic actions. Was his childhood privileged or a struggle? Did he always speak before thinking? Did his arrogance start at a young age or when fame and fortune hit? A few of my questions were answered but mostly, I got a sense of his upbringing. The year spent in China, living in Chicago and the separation of his parents was discussed in detail. As were his experiences in the music industry. Donda West did not skimp on the inside scoop.

"And in a society where our legacy is surely the love of our forefathers but also the hate of slave masters, it is imperative that parents consciously teach the love of self, the courage of Malcolm, the wisdom of Martin, the tenacity of Marcus." ~ pg. 85

I won't speak ill of an angel; so let's just say I now understand the origin of Kanye's views. Sadly, I also understand how close Kanye was to his mother. They were best friends. I cannot imagine the pain and heartache. The absence of conversating (it's now a real word!) with a like-minded person must feel lonely. Holding onto thoughts until he bursts into a rant that the general public does not understand. Reading Raising Kanye did not stop my side-eye but I now have patience with Kanye's antics. It is coming from a sincere place on a level not everyone understands. Bookhearts, let us not write him off just yet. I hope he finds peace and stability.

SideNote: Dare I say that I like four out of seven songs on Kanye West's new album, ye.