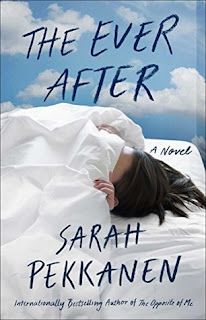 "She didn't have the luxury of choosing her battles; she needed to eliminate every potential conflict in her life so that she could focus on the seismic one currently gripping her." ~ 49%

Do you remember the exact moment you created a secret? When the truth is revealed, you may wonder back in time to that moment. How you could have prevented it. Whom you should have told. So when Josie borrows her husband's phone and sees nine words that shatter her seemingly happily ever after marriage, she looks back at such moments. Then Josie goes to far lengths to uncover more secrets before determining if her marriage is worth saving.

I am a fan of Sarah Pekkanen's earlier novels. They are quality women's literature with real issues and intriguing storylines. So I expected her usual in new release Ever After. And it is. But unfortunately, I was disappointed and had to fight the urge to not skim. Perhaps because I could not relate to the marriage difficulties which were the focus. Or maybe it was the lengthy passages that were too wordy and unnecessary. Either way, I could have passed on Ever After but you may think differently. Like Pekkanen's other novels, there are more than a few women out here that can connect to her stories.

Happy Early Pub Day, Sarah Pekkanen. Ever After will be available Tuesday, June 5.