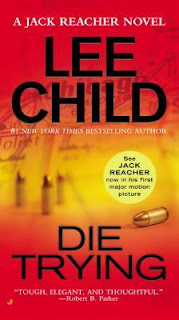 My Series Sunday pick is Die Trying, the second book in the Jack Reacher series by Lee Child. Talk about a book that opens with a bang! A dentist is killed in the first couple pages because he was brave. Then a young disabled woman is kidnapped off a Chicago street in broad daylight. Can't a chick pick up her dry cleaning without getting nabbed? It just so happens that Jack Reacher is at the wrong place at the wrong time. He is kidnapped right along with the woman. They are taken to an undisclosed location and held for an impossible ransom. Reacher tries to save them both or die trying.

Because the book was published in 1998 (twenty whole years ago), some details are a bit dated. It caught me off guard when fax machines were being used regularly and cell phones were not primary means of communication. One thing that is still relevant today though are bullets. Lee Child writes about guns, ranges and bullets like he invented firearms. The jargon was not overly used or hard to understand. If anything it adds to the suspense and action.

"Like we said, there are maybe sixty million Americans ready to be tipped over the edge." ~ pg. 355

My Gawd do I enjoy a thick ass paperback. I kick up my feet on the ottoman with a cold refreshing beverage on my left and a tasty snack on my right. Even though Die Trying is well over 500 pages long, I finished this book in a few days' time. Surprisingly, there was no unnecessary dialogue or description. Absolutely no filler! Every chapter was vital to the story. This takes great author skill and good reader patience.

It is going to take me quite a while to catch up in this series; Die Trying is only book 2 out of 23. I am sooooo tempted to read out of sequence but since I own most of the paperback editions, I will read this series at my leisure. Any bookhearts care to join me?