The Mother of Black Hollywood 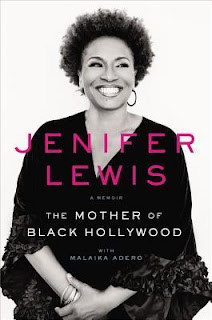 "...medical science believes bipolar disorder is partly caused by an imbalance of brain chemicals called neurotransmitters, such as serotonin and dopamine. Neuro what? Dopey who?" ~ pg. 146

Some may know her as Ruby in black-ish. Those of us who have followed her career over the years know her as Angela Bassett's mama, Tupac's mama, Taraji's mama, Gabrielle Union's mama, Whitney Houston's mama, Anthony Anderson's and Raven-Symone's mama. Hence, the nickname "Mother of Black Hollywood." Whether she is singing, dancing, or stealing scenes as the main or supporting character, she is respected as one of the most versatile entertainers today. A true triple threat! This talented woman is Jenifer Lewis, born and raised in the first self-governing black town in Missouri called Kinloch. Born in 1957 as the youngest of seven children. Living a grandeur life in 2018.

Her memoir, The Mother of Black Hollywood" walks readers through her upbringing, career, mental illness diagnosis and current state of mind. Jenifer Lewis is my new auntie-in-my-head. I hate that I missed her book-signing at the African-American Museum in Detroit. Word on the street is she went in; no holds barred style. I must meet her! She goes beyond keeping it real. She keeps it one hundred times one hundred. Some people may think she is loud or dramatic. But that is a misinterpretation. When Auntie Jenny speaks, best believe it is something worth listening to. And definitely worth reading.

It also co-signs what my Chickadee always told me: journal thoughts, feelings and experiences on paper. It is a great habit to develop. The Mother of Black Hollywood is proof; it was written based on Jenifer Lewis' own journaling. As I am sure it was a part of her self awareness and healing process in therapy too. This here is a woman comfortable in her own skin, not afraid to come out of the darkness and share lessons learned.

The Mother of Black Hollywood is very good. Need more convincing? Watch her interview with The Breakfast Club. She talks with great candor about life off-screen, bipolar disorder, dick addiction, and professional athletes using their platform. Maybe then you'll be curious enough to read her life story. Dare I say this is required reading for millennials!