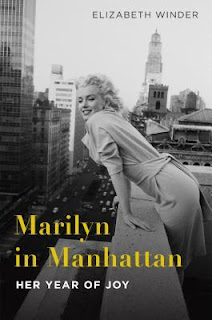 "In late November 1954, a woman who identified herself as Zelda Zonk drove quietly to the LAX airport and boarded the evening's last plane to New York. Accompanied by a young photographer named Milton Greene, the woman wore no makeup, a man's oxford shirt, and Jax cigarette pants under a full-length black mink. She wore a black wig cut in a blunt pageboy and, though it was nearly midnight, black Wayfarers. She lit cigarettes and bit her nails like any other jittery twenty-eight-year-old about to jettison marriage, home, and career in the course of one midnight flight."

~ Marilyn in Manhattan: Her Year of Joy by Elizabeth Winder