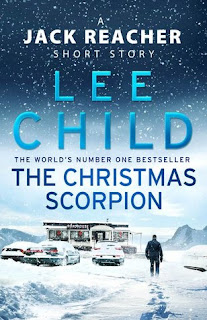 My Series Sunday pick is The Christmas Scorpion, book #22.5 in the Jack Reacher series by Lee Child. A super short and to the plot eBook that was easy to read from start to finish. The details made it addicting to read in one sitting. Quite the opposite from the quote below.

Just like the birds, Jack Reacher likes to head south for winter. He carefully plans his route and arrives in Southern California just before Christmas. But it's a freak blizzard! He finds refuge in a roadhouse with four other strangers: an older couple and two British military police separated from their VIP. So much for protecting their subject. Reacher offers to help find their VIP but he can't very well leave the older couple snowed in. Now Reacher is responsible to keeping everyone safe from an undercover assassin on the loose in a snow blizzard.

The Christmas Scorpion is a great short book for the Perpetual Jack Reacher challenge! Lose yourself in a fictional snow blizzard mystery for an hour or so.