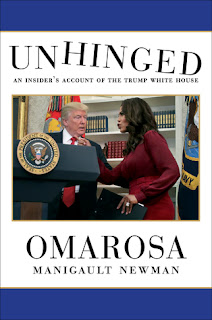 Like most Black Americans, I had an unfavorable opinion of Omarosa Manigault Newman. I only knew what the media portrayed her to be. I didn't pay much attention to her work for the Democratic Party or the Republican Party. I forgot she served in the Clinton White House and was instrumental in Hillary Clinton's campaign. I didn't become interested in her story until she appeared on one of my favorite reality TV shows, Big Brother, and emotionally told a fellow housemate that things will not be okay. I watched her mannerisms, her game strategy and her diary room sessions with a new interest. Dare I say I wanted her to win! (I root for everybody black though.)

So I hurried to the library and reserved my copy when her much-anticipated tell-all book was released. Admittedly, I did not want to spend my hard-earned coins in case she was on some bullshit. Instead I made use of my tax dollars and borrowed it from the local public library. I didn't know what to expect but promised I would begin the book with no preconceived notions and with an open mind.

First of all, the subtitle is misleading. Omarosa goes way beyond her time at the White House with Trump as President. She begins the story years back when she first met him and appeared on his reality show, Celebrity Apprentice. Forward through her time spent in politics for the next 20+ years. Then she chronicles life post-White House Trump era. Readers will get more info than the subtitle suggests as well as her take on things outside of the last election. But her purpose remains: showing just how unhinged the White House is today.

This book is indeed an inside look into the current administration. Corruption details and controversy fill the pages. Omarosa has been in Trump's circle for over 15 years. She knows all the inside scoop because she not only had a front row seat but shared the podium. Keep in mind that Omarosa owes the public nothing. We don't need an explanation on why she stuck by this man's side. Why she advocated for him. Why she cut ties with Hillary Clinton. Or even why she chose to be a housemate on Celebrity Big Brother. Yet she answers all of our unasked nosy questions in Unhinged.
"I kept getting tackled by my own teammates, always playing defense. I was working as hard and as fast as I could—my schedule during Black History Month alone exhausts me just writing about it—but the headlines were always asking, 'What's she doing there?'" ~ pg. 204

After reading Unhinged with an open mind, I believe that Omarosa is misunderstood and misjudged. Unlike the artist formerly known as Kanye, she acknowledges wrongly supporting a man and aiding in his representation of the country. She also had intentions of bettering the black community despite other people's agendas. Do I believe Omarosa was honest in her account of working with Trump? At times, yes. I more-so believe that she believes everything told in her story really happened as she has written. Do what you will with that tidbit, bookhearts. Whether you are a concerned citizen or merely looking for your next nonfiction read, Unhinged is worth the time.