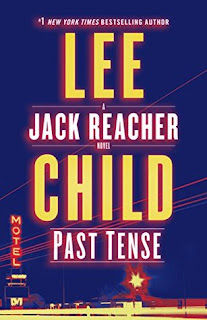 My Series Sunday pick is Past Tense, the 23rd book in the Jack Reacher series by Lee Child. In true Jack Reacher fashion, he sticks out his thumb hitchhiking for a ride across America. This time, Reacher is not traveling far. He is going to a small town where his father was born. Why not learn more about where his dad grew up? Except according to the city clerk's office and census experts, there is no record of anyone with the surname Reacher ever living in town. Meanwhile, a couple gets stranded at a motel in the middle of nowhere. Their car refuses to start and the motel staff seems strange. The storylines attempt to merge into one big suspenseful mystery.

Past Tense is the 23rd book in the series but only my sixth book read in the series. I am still fairly new to the character Jack Reacher. But enough to know he has a strong presence in every room he enters. He has a sharp mind. I've learned his appearance is tall, not so good looking and a little unkempt. His instincts are top notch. He can evaluate a situation and peg a person in seconds. It is these small details that make Jack Reacher stand out as a mystery main character amongst the likes of Myron Bolitar, Alex Cross, Mike Bennett and Easy Rawlins.

"Just three words, but in a tone also learned long ago, with whole extra paragraphs hidden in the dying vowel sound at the end of the phrase, about the inevitable and catastrophic result of attempted resistance." ~ 40%

Here's my three words: it didn't flow. Much like the sentence above. My newfound fondness for Jack Reacher took a disappointing dip. Past Tense was more like a bunch of short stories with a thin connection. Throwing in a subplot and a couple details of Reacher's past did not grab my attention. In fact, I struggled to finish. However, this does not discourage me from continuing with the series and my perpetual reading challenge. Even if I am reading the books backward.