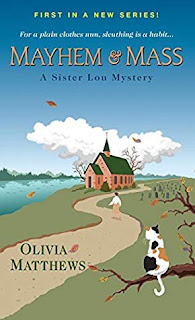 My Series Sunday pick is Mayhem & Mass, the first book in the Sister Lou mystery series by Olivia Matthews. Never have I ever read a book that features a Catholic Sister (not to be confused with a nun). Sister Louise "Lou" LaSalle is from Los Angeles but feels right at home in New York now. Her handsome nephew, Chris, works at the college founded by her congregation. All seems well for the L.A. transplant.

"He gives me information on a need-to-know basis, and, apparently, I often don't need to know." ~ 56%

Sister Lou invites an old friend to be a guest speaker for the St. Hermione of Ephesus Feast Day. She was not expecting the pushback. Sure, he has controversial views but he is a well-known theology professor. Sister Lou senses something is wrong when she meets him at a diner but chalks it up to his exhaustion from traveling. She was not prepared to find him dead in his hotel room the next day.

Do you see where this cozy mystery is going? Yeah, me too. So Sister Lou's faith is tested. The congregation is treated like suspects. Against her nephew's advice, she teams up with a local reporter to help solve the murder.

"So in addition to being a sister, you're a crack investigator?" ~ 72%

I didn't know what to expect when I started reading Mayhem & Mass. I steer clear of Christian fiction and the first lines were like a warning. But I hushed the inner voice telling me to stop reading and kept on flipping those ePages. It was not preachy. It was not full of Catholic views disguised as dialogue. Be it personal experience or research, Olivia Matthews delivers a positive depiction of a Sister. Oh wait—did I mention the author is a woman of color?!

Pseudonym Olivia Matthews created a loyal wise character in Sister Lou who will stop at nothing to get justice. She is quick to dismiss suspects with logic, unlike other cozy mysteries where suspects drag out the entirety of novel. The supporting characters—nephew Chris and news reporter Shari—are just as interesting. If it was the author's hope to help dispel stereotypes, then well done (so far). I got a sense of Sister Lou's compassionate spirit, loving nature and calling to help people in the community.

"Every time he spoke, she swore she heard Frank Sinatra's Nathan Detroit character from Guys and Dolls." ~ 13%

I look forward to reading more of this amateur sleuth team and already have the other two (2) eBooks of this cozy mystery series on deck. Matter fact, I just may read them back-to-back. I cannot remember how I stumbled upon this series but if it was suggested by a bookheart, thank you so much, (fill in your name here). Now I am passing on the recommendation.The Mayhem & Mass eBook is less than the price of an L Dot Dummy Mission ($5). Go download it...Amen 🙏🏽