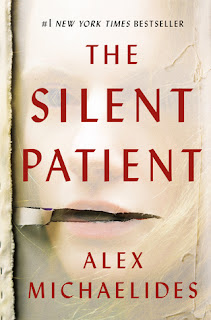 The Silent Patient is when Snapped meets greek tragedy: a woman's act of violence against her husband. Famous painter, Alicia Berenson, is married to fashion photographer, Gabriel. They live in one of London's most desirable areas. It seems to be a normal night when Gabriel returns home late from a fashion shoot until Alicia shoots him in the face multiple times. Then she never speaks another word. Literally, the lady stops talking to everybody.

The domestic murder was enough tragedy but Alicia's silence is the big mystery. She refuses to talk. She does not defend herself. She gives no kind of explanation. Alicia is hidden away at a secure forensic unit for observation from a criminal psychotherapist. What a twisted path!

"I'll love him no matter what he does, or what happens—no matter how much he upsets me—no matter how untidy or messy he is—how thoughtless, how selfish. I'll take him just as he is. Until death do us part." ~ pg. 61

The cover is certainly more cryptic than the story itself. I enjoyed the diary chapters much more than the therapist's point of view. Way more perspective and understanding from the silent patient herself. Although, I see what the author was trying to do. It could be the reason why I reached the end and thought it obvious.

What was meant to be an unpredictable major twist turned out "oh, okay." I don't think it is enough to claim The Silent Patient as one of 2019's best psychological thrillers but it is recommendable. Pssst🤫...borrow from your local library or use an audiobook credit.