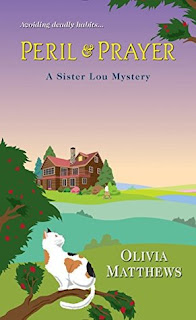 My Series Sunday pick is Peril & Prayer, the second book in the Sister Lou mystery series by Olivia Matthews. Sister Louise "Lou" LaSalle is a Catholic Sister from Los Angeles but feeling right at home in New York now. Her nephew, Chris, works at the college founded by her congregation. And her trusty sidekick is a news reporter named Shari. The trio is tasked with solving another murder in their small town of Briar Coast.

It's been barely a month since Sister Lou lost her friend to a tragic death and she solved the murder. Now one of Sister Lou's business acquaintances has been strangled to death hours before their scheduled business meeting. College donors are not happy about the school being linked to the murder. Nor is the congregation. There's a long list of people that threatened to kill the resort owner. It is in everyone's best interest for Sister Lou to solve this murder before deputies arrest the wrong person.

"If you were in law enforcement, would you want your case to be solved by a reporter, a college executive, and a sister? That sounds like the beginning of a bad joke." ~ 27%

Every story needs a villain. In a mystery, the villain is usually the killer. But in the case of Mayhem & Murder and Peril & Prayer, the character I love to hate is Sister Marianna. She is downright rude, bossy and combative. Now she is the #1 suspect. It made for an even more interesting mystery along with deputies proven to be more incompetent. God, I love a good cozy mystery with amateur sleuthing!

This is no fluke. I am finding enjoyment in reading this series featuring a Catholic Sister. Religion is barely mentioned. It is not riddled with spiritual quotes or conversation. Oh, and there is frequent mention of my favorite hot beverage: chai tea. I love it! It really is a wholesome refreshing series that I look forward to reading back-to-back. I'm kind of bummed there is only one more book I have left to read. Olivia Matthews, can a sistah get an in-between novella to tide me over?

Thanks again to the bookheart who recommended this series. Good find, (insert your name here)!