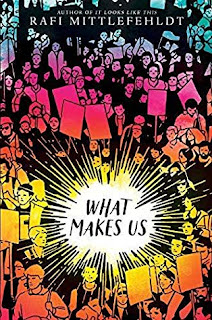 "Laws should never create an incentive for people in authority to do the wrong thing." ~ 13%

How about this book cover though? With its bright ombré colors and outlines of people holding protest signs. It is eye-catching and powerful. How can you not pick this up off a bookshelf or click a link for more information? Well I am glad I took the bait!

Constant Vigilance is a new program that allows police to pull people over for barely anything. It is not fair. It is not right. So Eran Sharon (pronounced Shah-Rohn) organizes a peaceful protest in his community. It is going well until a small counter-protest group approaches with signs that say "Blue Lives Matter" and "Don't like us? Don't call us." Conflict arises around news cameras and a crowd of witnesses. So what happens? Of course, a viral video captures a heated moment.

Eran knows little about his father. He's tall. He was from Israel then moved to New York. He left when Eran was just a baby. The flood gate of dark family history bursts open when a reporter connects Eran Sharon with a tragedy that happened fifteen years ago. Eran wonders if he is anything like his supposed terrorist father. What makes us who we are?

"Can someone make a terrible mistake and still be a good person?" ~ 85%

The main character was so realistic. He was not a teen that used big words or thought beyond his understanding. I think he was depicted in a realistic manner. Sometimes authors tend to forget the age of characters but not so in this book. Eran was relatable from the first chapter to the last words. Even Eema (pronounced EE-muh; Hebrew for mother) acted how a concerned parent of color would in real life. So the story flowed naturally with no annoyance. In fact, I finished in one lazy day.

Social justice issues are the focus of What Makes Us. Police brutality is such a national issue; a crisis actually. Other issues include homophobia, racism, reproductive rights, global warming, gun control and immigrant rights. Thanks to authors like Rafi Mittlefehldt for addressing it in books meant for young adults. It helps to spread awareness, remind them of how to look and act while in public and most importantly to be heard. Their voice matters!

Start the conversation! I absolutely recommend What Makes Us for young adults that are passionate about justice. Teachers, add this new book to your syllabus. Parents, talk to your children about social issues. Neighbors, look out for each other while protecting the community. News reporters, do not be so quick to spin stories for click bait. Rafi Mittlefehldt's new novel reminds readers: Try to be better.