Series Sunday: No Plan B 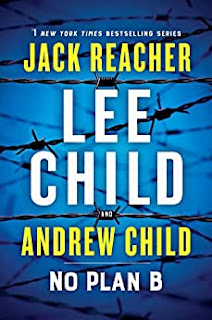 My Series Sunday pick is No Plan B, the 27th book in the Jack Reacher series by Lee and Andrew Child. One of my favorite grifters, Jack Reacher, arrived in Gerrardsville, Colorado, on a Monday. It is there that two witnesses to the same tragedy give two different accounts. One guy sees a woman throw herself in front of a bus. The other guy, Jack Reacher, sees the woman pushed to her death. Reacher follows the killer on foot, not knowing there is a secret conspiracy with many moving parts.
"It was a question of balance." ~ 48%
There is No Plan B when the threat is Reacher. He is 6'5", 250 lbs. and scruffy. You can't miss him. So why must the bad guys constantly try him? Underestimate him? Square up against him? Maybe the better question is why the author(s) continue putting Reacher in unnecessary situations where he has to fight his way out and drop countless bodies. For why?!
The only reason I did not DNF No Plan B is because I held out hope. I wanted the story to get more believable. More interesting. Different than the previous stop-in-a-small-town-witness-injustice-actively-go-after-bad-guys plot. I may have to stop reading the current releases in the Jack Reacher series and resume reading the earlier books for the character I fell in heavy like with. Because this new sh!t is not it.
Happy Early Pub Day, Lee and Andrew Child! No Plan B will be available Tuesday, October 25.

Disclaimer: An advance copy was received directly from the publisher in exchange for an honest review. Opinions are my own and would be the same if I spent my hard-earned coins.
Title: No Plan B
Author: Lee and Andrew Child
Published: October 2022
Pages: 336
Edition: Galley
Genre: Mystery
Challenge: Perpetual Jack Reacher
Rating: 🖤