What Happened to Ruthy Ramirez 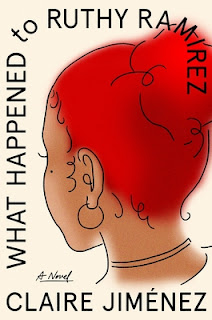 "We plotted." ~ 47%
All is well in the Ramirez household until 13-year-old middle child Ruthy disappeared without a trace after track practice. It left the family scarred. Twelve years later, their mother, Dolores, struggles with mental health, weight gain and diabetes. Older sister Jessica juggles a newborn baby and demanding hospital job. And Nina has returned home after graduating college to medical school rejections and a measly retail job in the mall.
Then one night, Jessica spots a woman with her missing sister's distinctive red hair and beauty mark on a Bad Girls type reality show going by the name of Ruby. After seeing Ruthy/Ruby on TV, the sisters hatch a plan to drive to Boston where the show is filmed. Dolores and her best friend join the sisters making it a family road trip filled with humor and hard truths, told in alternating narration that brings out each character's personality oh so perfectly.
"Sometimes the wrong people remember you." ~ 15%
Family dynamics in fiction are always fascinating to read. Especially when the family is going through drama like the Puerto Rican family, Ramirez. Their road trip from Staten Island to Boston is one that will make readers LOL while appreciating the culture and light mystery.
The best part of the novel wasn't even finding out what happened to Ruthy; it was the relationship between Dolores and her two remaining daughters, Nina and Jessica. Another major theme was self-realization and how you see yourself vs. how others see you. This was obviously the author's intent since the road trip to find Ruthy doesn't start until 80% through the book. It was the better story to tell up to very last sentence!
"In truth, there was nobody I admired more than my sister." ~ 85%
Very good first impression for a debut novel! What Happened to Ruthy Ramirez is equal parts hilarious and intriguing. It explores the familial bonds between mothers, daughters and sisters. Usually I am not a fan of alternating narration, but Claire Jiménez nails it! This story could not have been told any other way. I recommend for chick lit lovers and book clubs for minority women. Get lost in this well written debut featuring strong Brown women! I'll keep an eye out for more from Claire Jiménez.
Happy Early Pub Day, Claire Jiménez! What Happened to Ruthy Ramirez will be available Tuesday, March 7, 2023.
Disclaimer: An advance copy was received directly from the publisher in exchange for an honest review. Opinions are my own and would be the same if I spent my hard-earned coins.