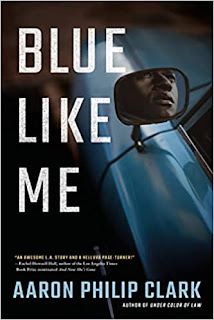 "People check out." ~ 57%
My Series Sunday pick is Blue Like Me, the second book in the Trevor Finnegan series by Aaron Philip Clark. It's been almost a year but I remember the fictional man of color I fell in like with named Finn. The intellectual rookie cop is now former detective/PI. His new occupation is catching LAPD's worst in the act. While on surveillance, he witnesses a presumed dirty cop be killed and his ex-partner wounded by gunshots. Then Finn's Uncle is murdered in what seems to be a connection. The investigation just turned deadly!
Oh, that's not all! Finn is also making an effort to spend more quality time with his father, prepare for a 6-month stay in France, domestic issues with girlfriend and become acquainted with a new person in his life. Whew—Finn has a lot going on!
"I'm a black man running around with a gun at a crime scene where the victims are LAPD officers and two bystanders." ~ 15%
Blue Like Me is suspense at its best! I was shocked at the end of almost every long chapter. Jaw dropped or saying aloud, "Whaaaaaat?!" I've read a ton of mystery in my day so plot twists rarely faze me. But Aaron Philip Clark managed to surprise me a couple times within these 250+ pages. At the same time, he fleshed out the main character Finn a little bit more in this second installment, dropping more personality hints and backstory along the way. I just wish it focused more on a certain storyline.
While Blue Like Me is the second book in the stories and I highly recommend reading Under Color of Law first, the author gives enough context clues for this to be read as a standalone. The Trevor Finnegan series is a winner...periodt!
Happy Early Pub Day, Aaron Philip Clark! Blue Like Me will be available Tuesday, November 8.

Disclaimer: An advance copy was received directly from the publisher in exchange for an honest review. Opinions are my own and would be the same if I spent my hard-earned coins.
Title: Blue Like Me
Author: Aaron Philip Clark
Published: November 2022
Pages: 256
Edition: Galley
Genre: Mystery
Rating: 🖤 🖤 🖤 🖤