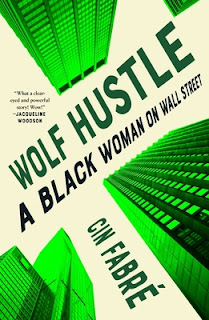 "There was darkness that came with this business." ~ 77%
Wolf Hustle: A Black Woman on Wall Street is the true story of Cin Fabré. She learned how to hustle from her immigrant parents. Eventually she saved money to escape poverty in the South Bronx. A tip from an old friend pushed Cin in the direction of VTR Capital, a brokerage firm offshoot of the company where Jordan Belfort, the Wolf of Wall Street, had reigned.
Cin rose through the ranks and broke the cycle of many Black/Brown people in "The Pit." Through her dedication, grueling hours and hustling spirit, she ascended from cold caller to stockbroker. She became the only Black woman to do so at her firm. Her years spent trading frantically led to a thrilling rich life.
"Whatever the reason, here I was, the only female in a sea of men." ~ 43%
Times have not changed much. Brokerage firms are still majority white male brokers. Females are few and far between in the business. However, it took damn near half the book to reach the main point. I won't say everything to this point was irrelevant but the title and synopsis led readers to believe this is the story of a Black woman on Wall Street. Yet we don't even reach this point until halfway through this rags-to-riches story.
Cin held nothing back, from not passing a series exam by three measly points to the drugs and alcohol, lavish parties and shopping sprees. Her story is entertaining and at times motivating. I just wish it focused more on the Wall Street part.
Happy Early Pub Day, Cin Fabré! Wolf Hustle will be available Tuesday, September 20.
Disclaimer: An advance copy was received directly from the publisher in exchange for an honest review. Opinions are my own and would be the same if I spent my hard-earned coins.