Are You There, Vodka? It's Me, Chelsea. 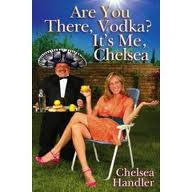 First of all, let's take a moment to laugh at the title. What a funny spin on Judy Blume's Are You There, God? It's Me, Margaret. Okay, now on to the review.

You may be familiar with Chelsea Handler from her late night show on E! network, Chelsea Lately. Her humor can be offensive, racial and harsh. My kind of comedy! Well her book Are You There, Vodka? It's Me, Chelsea is no exception. She really lets loose in words.

It is a collection of memories and experiences of her younger life. Topics include sex, red-headed men, sibling rivalry, her short stay in prison, obsession with midgets, and effects of drinking vodka. Hilar! I read it while traveling on an air flight and had to cover my giggles to avoid stares from nearby passengers. Yes, laugh out loud funny chapters. I'm looking forward to the television pilot loosely based on the book that will play on NBC. Check out the sneak peek video below.

I recommend it to adults who "get" Chelsea's humor and isn't easily offended by racy jokes.