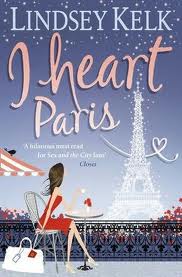 My Series Sunday pick is I Heart Paris, the third book in the I Heart series by Lindsey Kelk. Angela is in the city of love: Paris. It is supposed to be a romantic working trip with boyfriend Alex. He was playing in a festival. She was to write an article for fashion magazine Belle. But the trip isn't turning out right. First, her luggage is blown up by airport officials. Her best friend Jenny is not speaking to her. Alex's ex-girlfriend is trying to win him back. And someone is sabotaging her career putting the visa in jeopardy.
Like the other two previous books in this series, Angela isn't a good communicator. She overreacts to situations and always thinks the worst. In this book, it started to get annoying. The refreshing parts were reading about Paris scenery and the sub-characters like Jenny, Alex and Louisa. It was an okay read and I will continue the series. I'm actually excited that I Heart Vegas will be released in December.
Title: