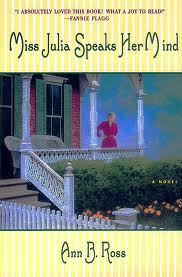 My Series Sunday pick is Miss Julia Speaks Her Mind, the first book in the Miss Julia series by Ann B. Ross. After 44 years of marriage, Miss Julia is now the grieving proud widow of Wesley Lloyd. He was found slumped over the steering wheel of his new Buick. Although he was stingy while alive, his estate was plenty for Miss Julia. He owned half of the county, a bank, stocks, bonds, annuities and more wealth that grew by the day. Everyone wants to help her manage the finances, but after being on an allowance for 44 years, she is ready to handle it all herself.

What she isn't ready for is the surprise that lands on her doorstep. A nine-year-old boy named Wesley Lloyd, Jr. Yes, her husband also left behind an illegitimate son. The whole town knew her husband had been "philandering with a floozie." She apparently was the only one in the dark. Instead of hiding out in shame, she flaunts the boy around town, holding her head high until his great uncle returns to pick him up. Miss Julia is so preoccupied with being rid of little Lloyd that she doesn't question it...until the boy's mother appears on her doorstep beaten, bruised and looking for Junior.

I love this old bitty's thought process. My favorite line was, "But far be it from me to be nosy." But like the title, she truly speaks her mind. All her life, she took orders from religious men and allowed them to make decisions on her behalf. She assumed they were always right. Did what she was told. Agreed and went along with it. But now that she is a widow, Miss Julia says aloud exactly what she's been thinking. Problem is, the church doesn't like it.

This book was released over ten years ago. It was first introduced to me by another book blogger. I'm so glad I picked it up from the library. Better late than never! It was charming, southern, humorous and mysterious. It grabbed my attention enough to read the second book of the Miss Julia series.