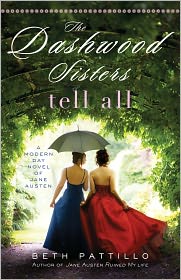 Ellen and Mimi Dodge are sisters forced to travel together through England because their mother, a devoted Austen fan, makes it a requirement in her will. The sisters were to participate in a Jane Austen themed walking tour in Hampshire, then agree on the most appropriate place to scatter her ashes. Only then would the sisters be entitled to receive an inheritance.
The purpose of the tour was to hopefully bring the Dodge sisters closer together. They couldn't be more different. In Jane Austen terms, Ellen had sense and Mimi had sensibility. Ellen was considered dull while Mimi was spontaneous. Ellen wore sensible shoes and hiking clothes; Mimi wore high heels and dresses. Money didn't matter to Ellen, but Mimi needed the inheritance money to open a fashion boutique. Modern-day Dashwood sisters?
I'd like to first acknowledge the map of England that the author includes in the beginning of the book. It helps to visualize the setting. Everyone knows I am completely obsessed with the UK, so the story immediately held my interest with descriptions of London town. The story is told in both sisters' point of view. Both characters are well developed. A character from a previous Beth Pattillo book also makes an appearance: Mrs. Gwendolyn Parrott of The Formidables.
Like I stated in a previous Pattillo review, I haven't indulged in the original Jane Austen novels yet. I have to be in the mood to read certain genres, including classic literature. However, books written by Beth Pattillo are a treat for me. They offer the right amount of Jane Austen knowledge, modern fiction and chick lit. Since The Dashwood Sisters Tell All was inspired by Sense and Sensibility, I will read the original Jane Austen book sooner rather than later. I recommend The Dashwood Sisters Tell All for chick lit lovers and Jane Austen fans.
Are you an Austen fan? How do you feel about Jane Austen inspired modern fiction?
Title: The Dashwood Sisters Tell All
Author: Beth Pattillo
Published: April 2011
Pages: 177
Edition: eBook
Rating: ♥♥♥♥