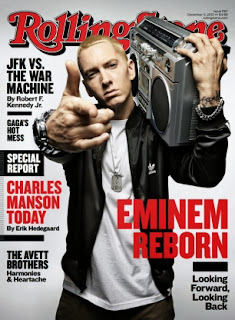 "Maybe it's the hair. You can't really see it under the plain black military scout's cap he's wearing this afternoon, but for the first time in half a decade or so, Eminem has reclaimed the Slim Shady platinum-blond look that he cast aside after beating a near-fatal pill addiction."

~ The Second Coming of Marshall Mathers in December 5, 2013 Issue of Rolling Stone