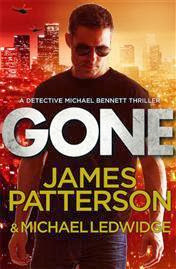 "The feds put us in witness protection, and I'd gone from NYPD Blue to Little House on the Prairie in no time flat." ~ pg. 21

My Series Sunday pick is Gone, the sixth book in the Detective Michael Bennett series by James Patterson. When we last read about Detective Mike Bennett and his family, they were being whisked off into Witness Protection. The whole family is moved to a safe house (cattle ranch) in California because Manuel Perrine, a dangerous drug cartel boss, is on the loose with a multimillion-dollar hit out on the Detective and his family. If you keep up with this series, you know the Detective cannot just sit still. But in no-man's land and for safety, he has no choice...until Perrine sparks war on U.S. soil and is responsible for mass murders and kidnappings. With his family's blessing, Detective Bennett comes out of hiding to catch the most dangerous criminal he's ever met.

Bookhearts, you know that James Patterson has been on my shit list for a while now. I thank goodness for the co-author of the Mike Bennett series because he is keeping it interesting and exempt from the recent JP curse of publishing mediocre-to-crap books. So thank you, Michael Ledwidge, for keeping this series afloat. I was not disappointed. In fact, I read it in one day. Yes, it was that good.