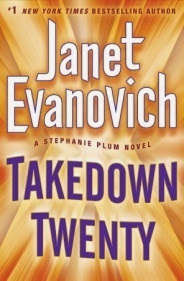 My Series Sunday pick is Takedown Twenty, the 20th book in the Stephanie Plum series by Janet Evanovich. New Jersey bounty hunter Stephanie Plum has to take down mob boss Uncle Sunny. Although he is charged with murder, the community is secretive about his whereabouts. Besides getting the run-around, Stephanie is also tasked with helping Ranger solve a bizarre death. They partner with Grandma Mazur to catch a killer, in between bingo games, at the senior citizen home.

*deep exhale* Why oh why do I keep reading the Stephanie Plum series? I might as well stop reading at this 20th installment and pick back up for the final book (if I am alive). I am convinced this series will outlast my life. It's never-freaking-ending! I am sick of the only black character Lulu stereotypically eating fried chicken and wearing kool-aid weave. There possibly can't be any more available cars for skips to blow up. The only surprise are random ass animals (this time, a giraffe named Kevin) showing up in the story. Let's face it, Plum fans; Morelli, Stephanie and Ranger will forever be a love triangle. I cannot continue riding out this series. My patience has been zapped by Grandma Mazur's stun gun. Throw me in a casket at the local Trenton funeral home. I am done.