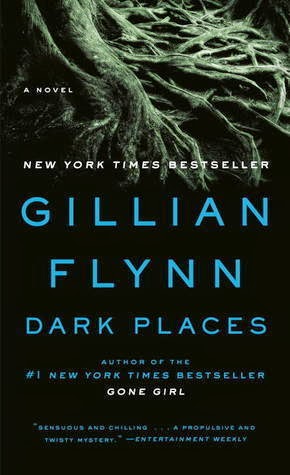 Dark Places begins with Libby daydreaming about killing herself. Spatter, splatter. What a twisted, mean character. Then again, life isn't so happy-go-lucky when your family was slaughtered when you were seven years old, and it was your testimony that convicted your brother of the murders. Libby was the only one who survived the Prairie Massacre. It explains why 31-year-old Libby has been depressed for twenty-four years.

With trust funds down to less than $1,000 and no job, Libby accepts an offer from the Kill Club, a group obsessed with notorious crimes. Hoping to financially gain from her tragic past, Libby agrees to revisit the details of that night...for a fee. The narration switches to 1985 and events are told through the eyes of Libby's mom and brother. Prophesized doom.

Dark Places has been on my reading list ever since reading Gone Girl from author Gillian Flynn. On a whim, I read it one Sunday afternoon along with a couple buddies. Oh, what a suspense! My theories were dispelled after every chapter. It was the type of mystery I read nonstop until it was solved. And even then... The obvious was not so obvious.

I know the movie (scheduled for release in September 2014) will be just as mysteriously thrilling. Libby will be played by the talented beautiful Charlize Theron. I highly recommend reading Dark Places but be sure to have a fluffy book on deck to stop your mind from spinning this dark tale.