Author of Nightmares and Other Therapy

Welcome to Literary Marie's Precision Reviews. Today we have a special guest post from D.W. Carver, author of Nightmares and Other Therapy.

Guest Post:
I am D W Carver, English, married with three adult sons and live in a suburb of London. I have been writing ever since I learned how. I have no real memory of a time when I started to write stories but know the first ones were simply written versions of the tales I used to tell myself when I was in bed trying not to think about monsters and bogeymen.

In the late eighties I worked for a national UK mental health charity as a counsellor, travelling round East London and Essex and running self-help groups. In those days lay organisations weren’t given much credence by the professional services and to be fair there were a lot of people out there who took their personal suffering as an ideal apprenticeship for teaching others ‘the right way’ and didn’t do a lot of good. This lack of interest from the health professionals actually helped us a good deal as my charity developed what to us was a common sense service – helping people to overcome practical difficulties one at a time. For example, one of my first clients was a young agoraphobic mother who couldn’t do the walk to school and used to go to the front door every morning in her night clothes when neighbours passed and ask one of them to take her son to school, allowing them to believe she was too lazy to do it herself. We helped her by planning a way she could practise the walk in company, with people stationed at the beginning and the end and eventually alone. In a very short time she was able to do the school walk by herself.

That was fairly typical of my experience – people needing very little actual help to overcome anxiety problems that had crippled them for years and when I began to write novels I often used this device. My lead characters (almost always female) were psychically injured by past events and brought themselves back to a full life with their own power of will and growing self-confidence. Naturally, my books involve a lot more gangsters, killers and general sociopaths than I tended to meet in the real world, but I did encounter my share of dangerous people.

A word of warning for potential readers: I spent many years working in rough areas and what is fairly common-place behaviour from my experience might be shocking to others. I recall long ago that an editor asked me to ‘water down’ an episode in one of my books as, to him, it was unbelievable. This had already been diluted from something that had actually happened in my presence. 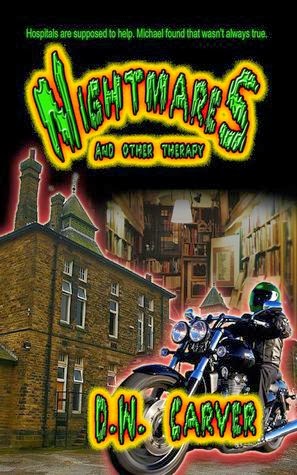 Book Description:
My novel ‘Nightmares and Other Therapy’ is about Michael and his teenage girlfriend Laura as they run away to avoid Michael’s arrest and find somewhere to start a new life.

Hospitals are supposed to help. Michael found that wasn't always true. Michael couldn't understand the nightmares that made him violent on waking, mostly because he didn't have the courage to think his problem through. Eventually, pressured into entering a mental hospital by his employers he thought that here he would find answers and a way to a better life. He was never more wrong.

Excerpts from Reviews:
For starters I really enjoyed how this book was written. The tone and pace of the book made it all the more enjoyable.

Although this isn't necessarily a happy book, I'd still recommend it. It's well written and is very thought provoking.

The characters are a lot of fun. It was unique and the major plot point that separates this novel from the others on the shelf. The split persona between Michael and his imaginary friend is extremely well-done.

It was well written, with believable and realistic characters.

Fast paced thriller/chiller that kept me up late into the night. Very original story line.

Those who like a good thriller will enjoy Nightmares and Other Therapy.

About the Author:
For more information, please visit www.dwcarver.com
Click here to order or add Nightmares and Other Therapy to your reading wish list.