Welcome to Literary Marie's Precision Reviews. Today we have a special guest post from J. Cafesin, author of Reverb.

A Life in the Arts:

How do you get good at anything?
Practice.

How do you get great?
Obsession—Practice most all the time.

Pick any famous author, artist, musician, and they'll all have obsession in common. And while we, the public, enjoy the fruits of their creative labor, those closest to these individuals were/are generally left wanting.

Charles Schulz, creator of the Peanuts comic strip, “was an indifferent and often inattentive father and husband.”

Rod Serling, of Twilight Zone fame, “worked 12 hours a day seven days a week, [and] his wife, Carol, tended to their daughters, Jodi and Anne.”

Adrienne Armstrong, wife of Billy Joe Armstrong of Green Day said of her husband after the release of the album American Idiot, “I think it challenged us to a new level, pushed us pretty far, the farthest I ever want to go.”

The creatives above are all men. All married and all had/have children.

The romance novelist Jane Austen never married. She was, in fact, 'relieved in later life to have avoided the pitfalls of married life, not least the huge risks of childbirth, “all the business of Mothering.”'

Georgia O'Keeffe, the surrealist artist “wanted to have children but agreed with him [her husband, Alfred Steiglitz] that motherhood was incompatible with her art. She needed to focus all of her attention on her painting.”

Oprah Winfrey, the media mogul has never married, “the very idea of what it means to be a wife and the responsibility and sacrifice that carries—I wouldn't have held that very well." And she never had children. “If I had kids, my kids would hate me. They would have ended up on the equivalent of the "Oprah" show talking about me; because something [in my life] would have had to suffer and it would've probably been them."

Ms. Winfrey had the guts to address the unvarnished, unspoken truth when she referred to the “responsibility and sacrifice,” in being a partner and parent. The investment of time, physical and psychic energy it takes to keep a marriage vital, and the even greater demands of being a conscientious parent, interferes, and often waylays the creative process.

Men have historically been the breadwinners in the family environment. And while this trend is slowly changing, the fact is women who seek personal excellence, especially in the arts, often have to choose between pursuing greatness and being, at least, an available partner and parent. Even today, men rarely have to make this choice. Regardless of this disparity, anyone, man or woman, obsessed with becoming great [at anything] should recognize the 'sacrifice' and costs to pursuing brilliance.

As a wife, mother, and a writer, my creative muse is constantly vying for prominence over the needs of my husband and especially my children. When my kids were babies, the creative process encountered fewer distractions. I could stay rapt in story, run dialog in my head while changing diapers or pushing them on the swing at the park. Small kids, small problems. Big kids, big issues. Now the parent to a tween and teen, my siren is often overwhelmed by the very real traumas and trials of adulthood my children face every day. To help them navigate these tumultuous times, I question, probe, even invade their space to stay connected, be there for them as a sounding board, a trusted confidant to lean on, to envelope them in a hug and hold them when they're falling.

I chose to marry, to have kids. And while I willingly choose to be present, available for my family, forfeiting the relentless pursuit of my creativity is a battle I engage in daily. Much of my fiction focuses on this internal war, as in my novel Reverb, through James Whren's obsession with his music, the cost to the lives he touched and the price he eventually paid absorbed in making it with his muse. My recent novel, Disconnected, explores the propaganda of the 1960s still being sold today, as Rachel struggles with the reality that we can't 'have it all,' be everything we want to be, and still be there for our kids and family.

We glorify the brilliant author, the renown artist, successes in business, often secretly wish to be one of the famous. But to become great at anything means obsessively working at the job or craft, honing a skill set with relentless practice, which is the fundamental reason why genius is so rarely achieved. The price those who solely engage with their creative muse must pay is actualizing a full and balanced life. 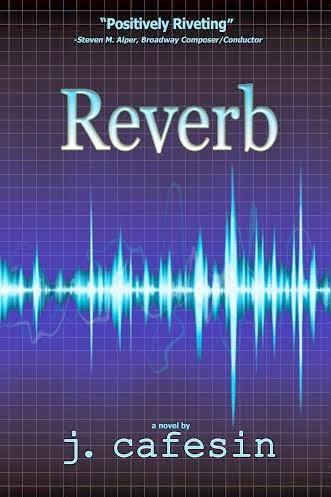 James Whren is brilliant, beautiful, rich, and taken—with his genius for creating music. Desired by many, he commits to no one but his muse. On the eve of his brother's funeral his father shatters his life, and James is left abandoned in hell with no one real to save him.

His odyssey to freedom takes him beyond the looking glass, to the reflection of friends and lovers. Humbled and alone, James escapes to the Greek island of Corfu. But instead of finding solace there, loneliness consumes him.

Until Elisabeth, and her son, Cameron...

Reverb is a love story, a psychological thriller paced with romantic suspense. It is a tale of redemption—the evolution of a modern man from solipsist to integrated awareness, the journey inadvertently awakening his capacity to love.

About the Author:
J. Cafesin is a novelist, essayist, realist and idealist. For more information and to purchase Reverb, please visit www.reverbnovel.com