Series Sunday: K is for Killer 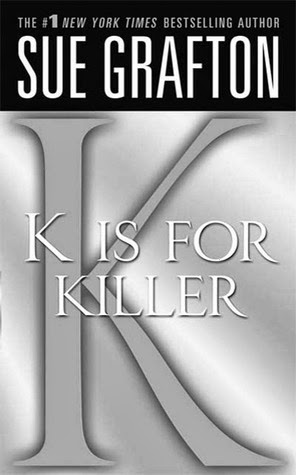 My Series Sunday selection is K is for Killer, the 11th book in the Kinsey Millhone alphabet series by Sue Grafton. Nothing ever good happens when you open the door for an unexpected guest. Grieving mother Janice Kepler knocks on P.I. Kinsey Millhone's office door late one night. Her beautiful daughter Lorna was murdered but the killer was never caught, a suspect was never apprehended. Kinsey tries to piece together what happened and determine which of Lorna's friends is the killer: a local DJ, a teenaged prostitute, her sloppy landlord or his exotic wife.

When I first read the synopsis and started reading K is for Killer, I thought it was a story of hanky panky gone wrong. The deceased has a dull day job but works as a prostitute and in pornography at night. There were so many characters/killer prospects that I almost had to keep track on a sticky note. Although, it did not make the story hard to follow, thanks to Sue Grafton's skilled writing.

My only gripe with this series are the meaningless descriptions that fill the pages. It begins with a lot of repetition describing the main character Kinsey and what she does for a living. Is it really necessary? How many readers pick up a random book and start reading in the middle of a series? I am willing to bet hardly none. So why still explain Kinsey's history in the 11th installment? Anywho...I will continue on with the series. The cases are getting more interesting and I want to find out more of Kinsey's personal life.