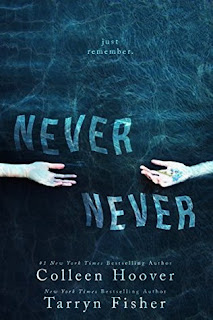 My Series Sunday pick is Never Never, the first book in the trilogy of same name by Colleen Hoover and Tarryn Fisher. I purposely put off reading this trilogy until the hype died down in the chick lit world. Plus bookhearts who read this book immediately upon its release last winter were sitting on their hands waiting for each installment to be published. So by my waiting, I can read all three back-to-back. In between tax filing duties and binge-watching season 4 of House of Cards, I decided now would be a good time to take a break and read at least the first book.

I expected nothing short of greatness with Never Never since it is co-authored by two New York Times bestselling authors: Colleen Hoover and Tarryn Fisher. Everyone was hush hush about the plot as if all readers took a vow to not disclose any deets. So I downloaded and started the book with only this description in mind:

The main characters—best friends—are Silas and Charlie. Something happened in the last twelve months but neither of them can remember. They barely recognize their own names. As I finished the first book, I realized why everyone was so secretive. Because there really isn't much to reveal other than the brief descriptive above. Color me confused yet intrigued at this point.