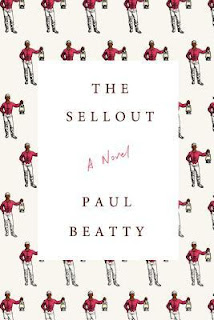 "This may be hard to believe, coming from a black man, but I've never stolen anything. Never cheated on my taxes or at cards. Never snuck into the movies or failed to give back the extra change to a drugstore cashier indifferent to the ways of mercantilism and minimum-wage expectations. But here I am..." ~ pg. 5

Paul Beatty, dubbed a comic genius, tells the story of a young man raised by a single father. His father's pioneering work was assumed to have resulted in a memoir that would solve financial woes. At least that was the main character's impression until his father was shot and killed by police. Then he realizes there never was a memoir and his hometown of Dickens, California has literally been removed from the map. Unlike Disneyland, the Happiest Place on Earth, or a small sub-Saharan African nation like Detroit. It becomes the young man's mission to use unorthodox ways to put Dickens back on the map through the Supreme Court of the United States of America.

"And by race we mean 'niggers,' because no one of any persuasion seems to have any difficulty talking out-of-pocket shit about Native Americans, Latinos, Asians, and America's newest race, the Celebrity." ~ pg. 245

At times a biting satire, Paul Beatty did not hold back thoughts or mince words. To read his insight on race in America, the treatment of black men, civil rights and challenging the United States Constitution in a comical way was a different reading experience for me. And I liked it except there were more than enough needless rants that was a distraction to the outrageous idea of reinstating slavery and segregation of schools. Yes, you read that right. So I struggled to hold my interest long enough to finish the satirical novel. Curious enough to go read The Sellout now?