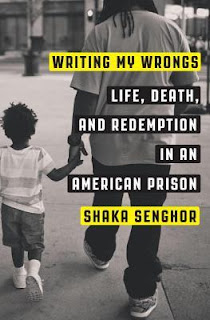 I trust any book that Chickadee recommends we read, without so much as a glance at the description. So when she asked if I planned to read Shaka Senghor's book, I did not hesitate to add Writing My Wrongs: Life, Death, and Redemption in an American Prison to my TBR. Plus how often do you see a cover featuring a black man with locs holding a young black boy's hand walking down a street? I had to read the content! My interest grew after watching the well-spoken writer on Oprah's Super Soul Sunday and learning he is from my hometown city.

"But to get there, I would first have to go through Michigan's version of hell on earth." ~ pg. 187

Shaka Senghor was raised in Detroit. Like any young boy, he had dreams but they soon unraveled after his parents' marriage ended and physical abuse from his mother worsened. At 14 years old, he ran away and started dealing drugs to survive. By 19 years old, he was in prison for second-degree murder. Senghor's story is told in alternating chapters between his youth and years of incarceration (seven of which were spent in solitary confinement). The familiar streets of East Detroit and Michigan counties play a large part as if they are characters.

Senghor is brutally honest about his childhood, adolescence and life as an imprisoned man acknowledging his wrongs. Mincing no words, he tells how people act and think in environments surrounded by drugs and violence. There were many moments where I put the book down and asked myself if shit like this really happens. No, this is not a hood tale or a glorification of the street life. Nor is it an ex-prisoner-found-Jesus type of book. There are no light-hearted funny Piper and Crazy Eyes type of chapters. And yes, you may read the last page with a different perspective on convicted criminals and mass incarceration; I certainly did. Writing My Wrongs goes beyond prison cells and tells an unforgettable, well-structured story about Life, Death, and Redemption in an American Prison.

"Each day in the hole was a test of my will to survive, as the insanity continued to unfold around me, but the act of writing about the things I saw helped to take away their power." ~ pg. 195

The praises for Writing My Wrongs are no exaggeration. Van Jones believes it is already taking place alongside Malcolm X's memoir. Baratunde Thurston says, "his determination to move from community liability to asset reminds us that no life should be written off." I agree; there is no way anyone can read the perfectly-titled Writing My Wrongs and not walk away with something valuable.

I opened this book on a Friday afternoon to post the first lines on my bookish meme and didn't stop reading until my eyes grew heavy into the evening. I literally took one bathroom break and another to refill my tea. It drew me in from the Prologue and demanded my attention until I finally finished on a Sunday night. I read way too many books to remember every plot detail and character name. What I do remember is how a book affected me. Those are the books that I reserve five hearts ratings for.

Writing My Wrongs is highly recommended for young men. I urge my bookhearts—especially those who are mothers of sons—to read it. Mentors may use this book as a topic of discussion about redemption and excessive punishment. Gift it to loved ones who may be incarcerated as a sign of hope and written testimony. I suggest my bookhearts that are professional educators to introduce Senghor's autobiography to students. Read the lessons within its pages and pass it on.