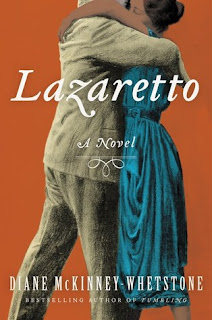 "Right now she was tired of feeling sorry for white people." ~ pg. 184

Is it ever a good time to read a book with a serious historical subject matter? Especially when we still fight for freedom and equal rights in 2016? It is summertime and the racial violence continues all over the United States. I tried putting off reading Lazaretto until the fall season when leaves and a crisp breeze would be my setting outside the window. I had already borrowed it from the library and renewed it twice. Honestly, I only picked it up now instead of later to avoid late fees. What I did not expect when I cracked open the hardcover was to be reminded how small the world is.

"The earth had not tilted to make him know this truth; the heavens had not opened to a thousand angels singing; the river had not reversed its course, or turned to blood, or wine, or run dry." ~ pg. 314

Lazaretto begins in post-Civil War Philadelphia as a young black woman, Meda, gives birth to a baby fathered by her wealthy white employer. After being told that her child is dead, Meda dedicates her life to working in an orphanage and becoming a surrogate mother to two white boys. Meanwhile, the midwife's teenage apprentice, Sylvia, still feels guilty about the lie she was forced to tell Meda. She puts all her energy into working at Lazaretto, the country's first quarantine hospital south of Philadelphia. It is suddenly put on lockdown when an act by one man has a domino effect.

I am very picky with historical fiction. The book has to have the right balance of fact and fiction. The characters must have depth with a personality appropriate to the era. For example, I will give a serious side-eye if a story based in the 18th century mentions color TVs. One slip and I am done with the book.

Kudos to author Diane McKinney-Whetstone for keeping it time appropriate yet entertaining. I see why she is the two-time recipient of the Black Caucus of the American Library Association's Literary Award. Lazaretto is recommended to bookhearts that like historical fiction and slower paced stories. Take your time with this one!