It's Up to the Women 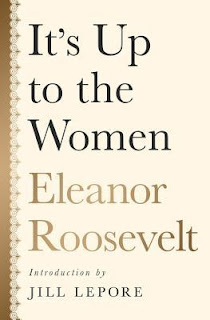 "We should be able to realize that making up our minds as to what gives us the greatest amount of pleasure and then working for it, is one of the satisfactions of life." ~ 9%

We all have the capability to make a change, no matter our position in life. Eleanor Roosevelt was the longest-serving first lady of the U.S. (1933-1945), an American politician, women's rights activist and the outspoken member of the White House. She was a powerful woman and used her position for the good in a time where women were expected to be silent, stand by their man quietly and not speak in public. Her writing a book in 1933 was shocking to the world.

First Lady Eleanor Roosevelt (ER) gives advice to women of all ages in every aspect of life in her first published book, It's Up to the Women. Written during the Great Depression, she asks women do their part to get through the economic and financial hardship. Topics include hunger, homelessness, working in and outside the home, unemployment, education and independence. She encourages women to play influential roles in their public and private life.

"It is important that women think beyond the mere moment through which we are passing and acquaint themselves with all phases of life and conditions in our own country." ~ 19%

ER was ahead of her time. She was an active First Lady, writing this book during the first year. She toured around the country speaking, was involved in politics and press conferences. She was one of the first women to actively speak up about equal pay for equal work. She rooted for quality education and the right to vote. ER knew the importance of her position as First Lady and stepped outside the box.

It's Up to the Women was first published in 1933. Its next expected publication date is April 11. The content and ER's words are just as relevant today as it was 80+ years ago. I have a sense of self-accountability after reading this re-published book. It is indeed up to us women. We run the world, right? Now, more than ever, we need to act like it.