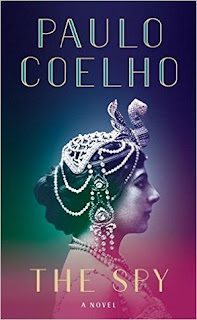 Although born Margaretha Zelle, then later Madame MacLeod through marriage, and H21 by the Germans, I will respectfully refer to her as Mata Hari, the name and independent woman she wishes to be known as.

Mata Hari left a husband and daughter behind in Holland with no money or belongings. Only a will for freedom since arriving in Paris and becoming a famous dancer shocking audiences. She has been the fascination of men and envy of women. Lover of the richest and most powerful men, however, was her demise. Her lifestyle (and pillow talk) brought her under suspicion. Despite Mata Hari's efforts to escape dependence, conflicts still pursued her.

Being an independent woman was her crime. Mata Hari was accused of espionage. Arrested in 1917 as paranoia consumed a country at war. She was accused of spying for Germany, France and Russia. The Spy is her story told through her voice in a final letter.

Paulo Coelho has a distinctive way of weaving a story based on facts and history into an unforgettable tale. Dare I say almost all of Paulo Coelho books are classic status. The Spy is not excluded.

Published in November 2016 and read after I published my Top Books of 2016. Otherwise it would have easily been listed among the best. Alas, let me deem it my first favorite book of 2017.