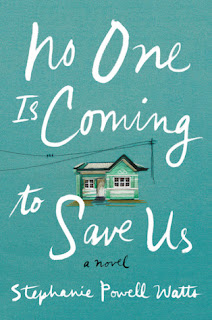 "The house he's building is done mostly. All that's missing now is the prettying, stain on the sprawling deck, final finishing inside. At least that's what they say. This house has been the talk around our small town. Not much happens here but the same, same: a thirteen-year-old girl waiting for the baby her mother's sorry boyfriend gave her; the husband we wanted to believe was one of the good ones found out to be the worst kind of cheater with a whole other family two towns over. The same stupid surprises, the usual sadnesses. But this thing is strange."

~ No One Is Coming to Save Us by Stephanie Powell Watts