Series Sunday: P is for Peril 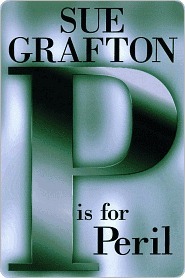 My Series Sunday pick is P is for Peril, the 16th book in the Kinsey Millhone series by Sue Grafton. My fave Private Investigator is knee deep into a case involving a missing man, his angry ex-wife, his carefree current wife and unfinished business. She doesn't even realize that the man she's attracted to has a fatal secret. Kinsey doesn't realize until it's too late that a killer is standing right before her eyes.

What a letdown! Especially after reading one of the best books of this series (O is for Outlaw). This one just fell flat. Why do I expect more of Kinsey's personal life when it's never been the basis of this whole series?! It is not the fault of the author; I get that Sue Grafton wants to focus on solving mysteries and not too much on the main character. But can I get another morsel here?

Of course this does not discourage me from continuing the series. In fact, I am eager to catch up now. You should too!