Series Sunday: O is for Outlaw 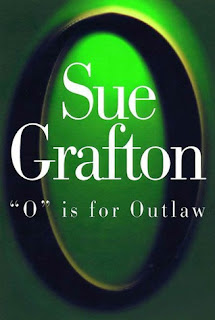 My Series Sunday pick is O is for Outlaw, the 15th book in the Kinsey Millhone series by Sue Grafton. How refreshing it is to still enjoy a series this far into it. I am still finding out personal things about the private Private Investigator, Kinsey Millhone. At this point, all readers know very little about her. We know she was raised by an aunt, twice divorced, briefly worked as a cop and has a long-lost family somewhere up the California coast.

On a random morning, Kinsey receives a phone call from a storage unit auction winner (yes, it is a real thing! People actually bid on storage units that have defaulted in payment and auction off the found items.) He contacts Kinsey to sell her the contents of a box. Now she is no sentimental character. She couldn't care less about personal belongings. But out of curiosity, she buys it for a cool twenty bucks. Inside sends her down memory lane and forces her to face the breakup of her first marriage.

I was so eager to read this because finally more than a dollop of personal info on Kinsey! It was well-placed in the series and kept me glued to the end. Bookhearts, if you have not already started this series it is not too late. Read now!