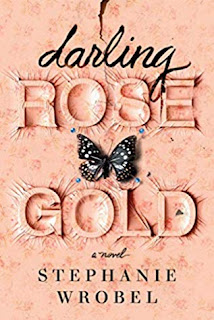 "The debt between a child and her mother could never be repaid, like running a foot race against someone fifteen miles ahead of you. What hope did you have of catching up?" ~ 78%

Mother-daughter relationships are fragile. You are either best friends or tolerant of each other. In Rose Gold Watts case, her relationship with mother is complicated. For the first 18 years of her life, Rose Gold believed she was seriously ill. Allergic to everything, practically lived in the hospital and used a wheelchair. Neighbors held fundraisers to help with medical expenses. The whole community took on the burden because no one could figure out what was wrong. As it turns out, her mother, Patty Watts, was the cause.

The novel begins with Patty Watts being released from prison after five years. With nowhere to go, Rose Gold takes her in. Of course the entire community is against the idea and has not forgiven Patty. What kind of mother tortures and lies to her child? But they both want to reconcile and build a healthier mother-daughter relationship. But has Patty really forgiven her daughter for testifying against her? And is Rose Gold still the naive darling little girl?

Oh what a twisted tale this weaved! Darling Rose Gold is such a great debut novel. I admit that I do not give debuts a fair try sometimes. The book cover, synopsis and book blurbs have to catch my attention. All criteria met so I was excited to try someone new. And let me tell you, bookhearts, Stephanie Wrobel is now on my watchlist; Darling Rose Gold deserves a spot in my best books of 2020. She did that!