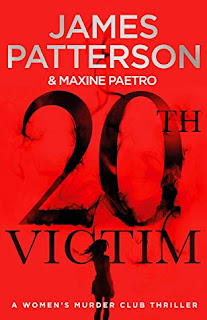 My Series Sunday pick is 20th Victim, the 20th book in the Women's Murder Club series by James Patterson & Maxine Paetro. Three public figures. Three bullets. Three cities. Same damn time. Then more murders. Each one of the victims are shot and killed with the target precision of a professional. Also, each victim is found with a large quantity of illegal drugs. This is not recreational use; it is drug-dealing level. Someone wants these criminals off the streets. Vigilante on the loose? Justice shooter? Or stone-cold killer?

The Women's Murder Club (Homicide Detective Lindsay, Chief Medical Examiner Claire, Crime Journalist Cindy and Assistant District Attorney Yuki) scramble to solve their independent cases while keeping a healthy work-life balance. Two of the women are on the outs professionally, while another struggles with ethics/morality and the last woman is standing after a health crisis.

Have you ever read a series and started to dislike one of the main characters? Surely it is not just me. Well, Cindy, the nosy ass crime journalist, really grated my nerves in 20th Victim. What an annoying selfish friend she has become! I dreaded every chapter where she was the point of view. It made me appreciate the other three main characters more. It doesn't help that the lack of suspense and murder mystery took a backseat.

My new dislike for one of the characters is not enough for me to stop reading the Women's Murder Club series. I am still very much a fan. I still look forward to new releases even though 20th Victim was not a fast-paced thriller as the rest, despite the signature short chapters that I love. But please, authors I beg of you, reconsider the character development.