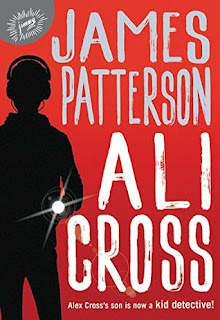 My Series Sunday pick is Ali Cross, the first book in self-titled series by James Patterson. Can you hear me squealing? Imagine my delight when I saw that James Patterson started a new book series featuring the son of the great Alex Cross? You read right; Ali Cross is now a kid detective!

"He was an intelligent, creative kid, but he also tended to fixate on whatever was in front of him, at which point he was more pit bull than wise old owl." ~ pg. 36

Ali Cross would love to follow in his father's footsteps. He is eager for a mystery of his own to solve. But when his friend goes missing, it is more than a notion to find him. At the same time, a string of burglaries target the neighborhood and even Ali's house is hit. With his father preoccupied with his own case, Ali takes it upon himself to find his friend solo. He discovers clues are not always what they seem. Being a sleuth ain't easy!

Ali Cross is perfect for parents/aunts/uncles that are Alex Cross fans and want the young children in their life to start a new mystery series. It is very kid-friendly and age appropriate. What more could you want in a buddy read? I totally recommend for readers age 10-13.