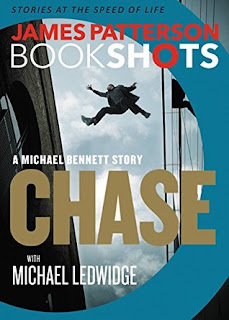 My Series Sunday pick is Chase, #9.5 in the Detective Michael Bennett series by James Patterson. Mike is the NYPD's go-to problem solver for major crimes. Some even consider him a fixer. His hands are certainly full with ten children, a grandfather and girlfriend. It is amazing he has time for investigations let alone a suicide whodunit.

A man falls to his death from the roof of a gorgeous brand new Manhattan hotel in front of multiple witnesses. Sure it looks like a suicide but is it really? Once Detective Michael Bennett is called on the case, he finds odd fingerprints and thousands in cash. Something isn't adding up.

What I like about BOOKSHOTS is the quick story in between major releases in series. It helps bridge the gap between reads. However, Chase is the first BOOKSHOT—out of the many I've read so far—to fall short. It could have been more suspense and personal to the characters. Bookhearts, you can safely skip this one.