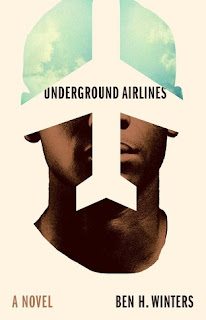 "Why, this was an illegal regulation of trade!"

With the state of our communities, I was reluctant to read a book set in present-day with legal slavery existing in four states. Yes, smartphones and social media and crooked law enforcement is around. But the Civil War never happened. Thus slavery still exists in "The Hard Four."

The main character, Victor, is a bounty hunter in this fictional version of the United States. The US Marshall Service hires him to hunt down a runaway named Jackdaw. But something doesn't seem right to Victor. The case file is incomplete. His contact is acting strange. And tracking down Jackdaw through the abolitionist movement "Underground Airlines" is the hardest job Victor ever accepted. He finds out secrets of the country and the real meaning of freedom.

I purposely avoided the controversy surrounding the book release of Underground Airlines. I did not want news clips or articles influencing my opinion of the book. I wanted to read it with a clear slate and only my own side-eye.

Let me start with the hardcover image. A black face and airplane outline. A real black face. Not some random off-colored image. It was the perfect hardcover book to read in public. Until around the middle of the book where a couple chapters could've been deleted. I do not like fillers and unfortunately, Underground Airlines had more than a few. I struggled to not skim.

Underground Airlines is not a page-turner by any definition. As I stated earlier in my review, this may not have been the right time to read such a book. How close is this to the real America? If the author's purpose was to spur speculation and open the eyes of U.S. citizens, then maybe he succeeded. Ben H. Winters certainly turned my side-eye around.