We Gon' Be Alright 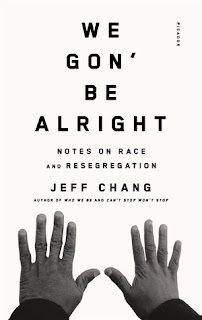 "History reminds us that desegregation is not a destination, it is a constant struggle." ~ 31%

Hands Up! Journalist Jeff Chang writes about recent tragedies and nationwide protests. The chapter titles and essays are relevant to today's culture. In the Introduction—the first lines, actually—names of the fallen are written, the Black presidency is mentioned, and the national justice movement is brought to the reader's attention reminding us that black lives matter. Some of the essays are about diversity, #OscarsSoWhite, Ferguson, cultural equity and making Lemonade. Chang writes passionately yet informative. He reports facts while holding readers' attention.

It didn't hit me until I read it in print. We really are living during the longest rebellion in U.S. history against police brutality, as Reverend Osagyefo says in We Gon' Be Alright. This book is recommended for those that understand the collective outrage and grief. Chang successfully tells how there is resegregation in 2016.

I know it is summer and meant for light reading. But there is no perfect time to read such a serious book. I suggest We Gon' Be Alright for diverse book clubs and mature discussions. I give this new release an extra star for the title alone. How appropriate. How catchy. How very good timing. Kendrick Lamar's song, Alright, has been my theme song all year. In my head, I have named it the soundtrack to the Black Lives Matter movement. It gives us hope that yes, we gon' be alright.
Happy Pub Day, Jeff Chang!

Posted by Literary Marie at 9:00 PM