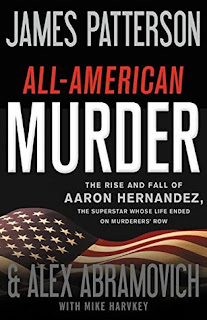 "Why would he jeopardize his life to go kill somebody a mile from his house?" ~ pg. 274

Ripped from the headlines indeed! Aaron Hernandez was an all-American college athlete. He played all the sports, became the youngest player in the NFL and later played the Super Bowl. The New England Patriots extended his contract to a whopping $40 million. What fans and the NFL did not know was that Aaron Hernandez was living a secret life...as a murderer. He was linked to a series of violent incidents and a double homicide that ultimately landed him in prison.

All-American Murder is the first of James Patterson's true crime investigative books. I like that he is branching out to write about real-life thrillers with the same classic short chapter style and feel of fiction. In fact, true mysteries make the best stories! Although I did not find Aaron Hernandez's rise and fall to be a page-turner, it was still very informative and worth the read. How can you resist the true tale of a superstar whose life ended on murderer's row?