You Can't Touch My Hair 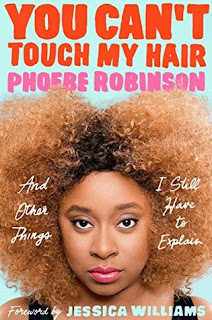 Podcaster, comedian and now NYT bestseller, Phoebe Robinson, writes about race and feminism. Who knew being a black woman in America could be told through pop culture references and comedic essays?

Phoebe leaves no stone unturned in explaining our so-called postracial society. I could easily relate to a few essays: to being told that I "talk white" to patting my head like the bottom of a Heinz ketchup bottle when my scalp itches. Some things really are a "black thing." I especially nodded my head in agreement and laughed on the chapter about being that one black friend/co-worker that has to speak for all blacks. *gives Phoebe that #OneOtherBlackPersonInTheRoomAcknowledgementNod*

"Don't Let February Turn into a Twenty-Eight-Day Press Conference in Which You Are the One Answering All the Questions" ~ pg. 127

Unfortunately too few of the essays were just okay and a bit long-winded. I had to fight the urge to skim through getting to the good parts. Looking at other reviews, I was not the only reader that couldn't get into the book like I wanted to. The content was certainly not the issue. Perhaps the writing and overall voice? I cannot pinpoint why the book fell short but maybe her brand of comedy just isn't for me.

Title: You Can't Touch My Hair: And Other Things I Still Have to Explain
Author: Phoebe Robinson
Published: October 2016
Pages: 318
Edition: eBook
Challenge: Popsugar—A Book Tied to My Ancestry
Rating: 🖤 🖤