Series Sunday: A Wrinkle in Time 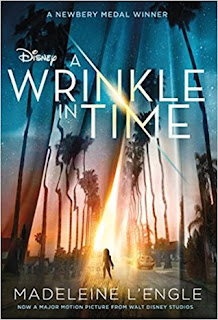 My Series Sunday pick is A Wrinkle in Time, the first book in the Time Quintet series by Madeleine L'Engle. Did you not realize this is a series? You're not the only one. This book begins with the famous line: It was a dark and stormy night. And so begins the classic.

Meg Murry is in her attic bedroom wide awake due to the storm. She walks down to the kitchen and joins her little brother, Charles Wallace, and their mother for a midnight snack and hot cocoa. They are disturbed by the arrival of an unearthly stranger dressed in odd getup of layered patterned scarves and water-filled boots. Perhaps this wouldn't have happened if Meg's father was around. He'd been experimenting with time travel when he mysteriously disappeared. With the help of her little brother and friend Calvin, Meg sets out to rescue her father on a journey through space. Three celestial beings (Mrs. Whatsit, Mrs. Who and Mrs. Which) lead them on the adventure.

First of all, the new movie tie-in edition is everything! It includes An Appreciation by Ava DuVernay, director of the film, highlighting her personal ties to author Madeleine L'Engle's work. Speaking of, the last interview with the author is included. I learned we share a taste for Cream of Wheat with butter and brown sugar...yum! She also tells how hard it was to get A Wrinkle in Time published. Who would've thought? There are eight pages of full color photos from the movie. What a colorful cast it is—Mindy Kaling, Oprah Winfrey, Reese Witherspoon, Chris Pine and Storm Reid. The movie tie-in book cover is striking! I received quite a few nods of approval when reading it in public. L'Engle's Newberry Medal Acceptance Speech: The Expanding Universe ends the book.

A Wrinkle in Time is a bit different from other Disney movies in regards to roles of mothers. Think about it. The characters either lost a mother or there is no mention at all. Why? Because Walt Disney's mother died in an accident that haunted Walt with grief for the rest of his life. He blamed himself for contributing to his mother's tragic death. But in A Wrinkle in Time, Meg's mother makes an appearance within the first fifty or so pages, sticking around longer than the usual Disney story.


"It's a frightening as well as an exciting thing to discover that matter and energy are the same thing, that size is an illusion, and that time is a material substance." ~ pg. 185

Re-reading classics usually bring on the nostalgia. But I didn't remember any tidbit about this book. Perhaps because I read it so long ago that the story did not stick. Or maybe because I did not have a movie to associate with it, like most classics. So my plan was to re-read the book then go see it on the big screen. I was all geeked after watching the official trailer above. However, lots of trusted reviews claimed the movie was not so good. The visual effects seem to be overpowering the story in movie adaptation. So I'll eventually watch the movie and judge for myself but no rush. What matters is I enjoyed reading A Wrinkle in Time the second time around and will most likely continue the series.

A Wrinkle in Time is a mix of fiction, science and fantasy. The story is a classic of children's literature intended for ages 8-10. I look forward to reading it for a third time with my niece. May I suggest to all bookhearts that you share this story with the youngins in your life. It is indeed magical!

Posted by Literary Marie at 6:30 PM