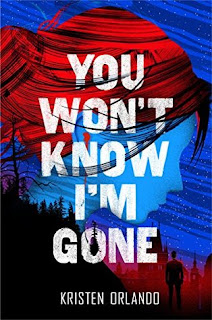 "The scar tissue around my heart flares, its stitches pull tighter." ~ 63%

My Series Sunday pick is You Won't Know I'm Gone, the second book in the Black Angel Chronicles series by Kristen Orlando. Last we saw of main character Reagan Hillis, she had gone rogue to rescue her kidnapped parents. Not following rules cost her an automatic ticket to training academy. But becoming a Black Angel is the only route to avenging her mother's killer, Torres. She will never find him without the agency's help or security clearance. Now Reagan fights between being her true self or an alias.

When I say I root for the main character aloud...I am not exaggerating. While turning the ePages, I am rooting like Arsenio Hall for badass Reagan Hillis. This second book was just as good as the first. Suspense was built slowly. It was not that predictable. And I legit feel invested in Reagan's journey to be an official Black Angel.

Listen, I LOVE THIS SERIES! I cannot even compare it to an existing series. Black Angel Chronicles is in its own lane. Nothing like Allegiant. Not even close to Hunger Games. It kinda sorta reminds me of the old television series starring Jessica Alba called Dark Angel, but not really. My point is Kristen Orlando has created a realistic YA thriller series that adults can enjoy too. Need I say more? Just read it.