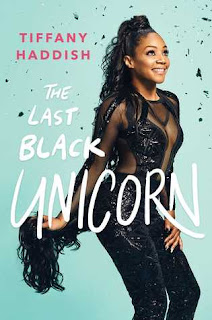 How many women do you know that met Beyonce, was a Bar Mitzvah hype woman, took a shit in a pair of Jordans, toured a swamp, grew up in the foster care system and lived to tell about it in a brutally honest yet hilarious way? Let me introduce you to Tiffany Haddish, The Last Black Unicorn. Her personal essays are told through the power of laughter.

I cannot deny Tiffany's humor. She can make me literally LOL whether I am watching her stand-up comedy special, her hilarious character on The Carmichael Show, breakout star of Girls Trip, or an interview. She has the gift of funny gab. What I didn't realize was how her funny jokes stem from real-life situations that are not so funny. From being raised in foster care to being physically abused, this woman has made it through some tough shit only to smile at the end.

Let this collection of essays be a lesson to women who may be experiencing similar life troubles. Tiffany's success story will shock and then inspire you. I don't know if this was her purpose in being so honest with her life, but it definitely garnered more respect. Now don't mistake my review in that this book is a downer. The overall tone is real-life comedy.

One of my fave bookhearts, Sonia Says aka Lady Bird, wrapped it up best: Expecting to laugh through the book but instead often felt hurt and angry for Tiffany. I join my bookheart in prayer that Tiffany Haddish has continued success and good health. And may the BeyHive let her live. May she continue to joke through it.