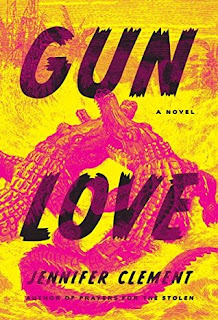 Who would've thought a bright yellow cover with hot pink alligator shadows would hold a tale about guns? Welp, Jennifer Clement pens a story of a resilient young girl growing up in contemporary America with its love of firearms.

Pearl lives in a car parked at the edge of a trailer park in the middle of Florida. It's the only home she knows. Just weeks after she was born, Pearl's mother ran away from home, taking with her valuables either for memories or to be sold when needed. But the most valuable thing she took is baby Pearl. Growing up in the front seat of a '94 Mercury with her mother living in the backseat was perfectly normal. Also normal was the sound of gunshots. Florida residents were the ultimate gun lovers. Some used guns to protect their family and others used guns to hunt alligators for sport. Again, Pearl knew no different.

Gun Love had the chance to be something so great. And maybe it is to some early readers. However, its greatness was lost on me. The beginning of the book was interesting. I'd never read about a character that basically didn't exist (no birth certificate, no identification, no home address, etc.) Nor had I read a book that mentioned guns like it was nothing. But when a third main character entered the picture, I was lost in the sauce of a lyrical writing style. The author was more concerned with writing metaphors and prose than developing the characters in a flowing story. It was a disappointing read.

Nevertheless, Happy Pub Day to Jennifer Clement! It is quite an accomplishment to publish a novel. Just because I didn't like it doesn't mean the next reader won't either. Gun Love is now available.